While doing research some years ago, a well known designer, Ezio Manzini, stumbled upon something that changed his way of thinking about sustainability.


He was supposed to find about emerging users’ needs, yet he was amazed to discover “creative communities”. He enthusiastically realized that people in those communities were so much more than mere users: they were, in his eyes, genuine “social heroes”. They were changing the world.

In the first place, what was being changed was their everyday life; basically they were inventing different and, more important, sustainable ways of living.

Those communities were, he would acknowledge later, a “fantastic expression” of a new world phenomenon. Those amazing people were the pioneers of social innovation.

That serendipitous encounter changed Manzini’s work. His way of dealing with sustainability shifted towards social innovation. He became interested in how he could use his “design knowledge and tools to empower these grass-roots social innovations”.

Let’s go further or, I may say, deeper into this meaningful story of social creativity and change.

For instance, what might have been the trigger or secret ingredient that made these communities of social innovators change their ways of living?

One observation made by Ezio Manzini may give us an important clue. The communities he encountered had “an unprecedented capacity to bring individual interests into line with social and environmental ones.”

Could it be possible that, given the present world circumstances, the creative brain of human beings have turned green?

Could it be conceivable that the embracing of their natural environment might have brought people back to their natural path of development?

This might be a fair assumption. Let’s imagine the whole picture!

Thinking green made people see they’re just a part of an ecological system of living things, made not only of plants and animals but also of human beings.

Thinking about sustainability made them aware of what being together in a connected world might be about.

C.Fred Alford, an unconventional political thinker, strongly believes that the natural path of development for individuals and groups requires the connected growth of both parties.

“Human excellences”, says Alford, “are so intrinsically social and relational that they must be practiced with others to be realized”.

Therefore, the “unprecedented capacity” to create a way of life that preserves individuals, groups and nature alike makes sense.

The groups of people discovered by Ezio Manzini may have reached a developed stage of community; and the secret ingredient for this momentous growth may be a creative green brain! He named them “creative communities”, didn’t he?

What if we assume that, turning their minds and energies towards nature, ecology, environmental causes or sustainability, people have returned to a natural path of being together?

A path that, being natural, is therefore capable of bringing genuine growth in their life.

This is more than a mere assumption regarding what the story I have told you might be about. It reminds us an ancient truth:

We must have faith in the Nature’s infinite power to inspire life!

We will find then, spreading fast throughout our planet, the wisdom of a creative green brain bringing people together to change the world. 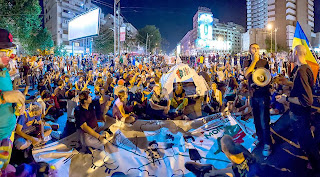